Links for DRACUL are up! Get your pre-orders in early to guarantee the best price. Signed hardcover editions are available through The Mysterious Bookshop in New York, NY, and select indie bookstores nationwide. Best part? They’ll ship! 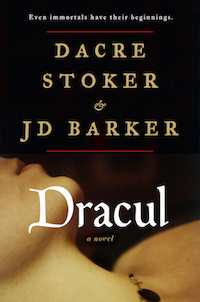 From the Publisher –
The prequel to Dracula, penned by a Stoker descendant and a bestselling writer, Dracul is a supernatural historical thriller in which a young Bram Stoker must confront an indescribable evil.

It is 1868, and a 22-year-old Bram Stoker has locked himself inside a desolate tower to face off against a vile and ungodly beast, armed with mirrors and crucifixes and holy water and a gun, kept company by a bottle of plum brandy, praying to survive a single night, the longest of his life. Desperate to leave a record of what he has witnessed, Bram scribbles out the events that led him here–a childhood illness, a haunting nanny, stories once thought to be fables now proven true.

A riveting novel of Gothic suspense, Dracul reveals not only Dracula’s true origin, but Bram Stoker’s–and the tale of the enigmatic woman who connects them.

“A compelling, deep, dark drama about Dracula’s origin. Even I had to keep the lights on when reading this book!”
—John Saul, NY Times Bestselling Author

“A big book that will no doubt be a hit among monster-movie and horror lit fans—and for good reason.”
—Kirkus

“An exhilarating fever dream of creeping dread and dark adventure. Reading Dracul is like stepping into a time machine and traveling back to a shadowy landscape ruled by nightmares. I devoured it in two sittings and was delighted and chilled with every turn of the page. You will be, too.”
—Richard Chizmar, New York Times Bestselling co-author of Gwendy’s Button Box

“Bram Stoker fans and scholars will find this a satisfying exploration of his legacy.”
—Publishers Weekly

“Brilliant. Dracul pumps fresh blood into the vampire genre by telling the story of the man who started it all — Bram Stoker. And what a story! A grand adventure that contains all the literary playfulness and mounting dread of the original Dracula. It gave me chills.”
—Riley Sager, Bestselling Author of Final Girls and The Last Time I Lied

“A terrifying and compelling prequel that reveals how a young Bram Stoker confronted evil to craft a masterpiece.”
—Library Journal

“Whatever fiendish bargain Stoker and Barker struck to resurrect the voice of Bram Stoker with such authenticity and aplomb, it was worth it, at least to their mere mortal readers. Dracul is a genius and fevered nightmare of Gothic madness, each page seeping with ominous dread and escalating horror. It is a prequel more than just worthy of the original novel— it is sure to be an undying classic of its own, haunting, terrifying and entertaining generations to come.”
—Eric Rickstad, New York Times Bestselling author of What Remains of Her and Silent Girls

“Scary as hell. Gothic as decay. Dracul will have you checking over your shoulder, under your bed, and up on the ceiling, too. All while wondering about the contents of every crate and oblong box you see.”
—Josh Malerman, Bestselling author of Bird Box

“Dracul is interesting because it sheds light on the original characters and author. Adding just the right touch of suspense increases the pace and ratchets up the tension, which appeals to the contemporary reader.”
—Booklist

“Dracul reveals not only Dracula’s “true” origin, but Bram Stoker’s as well. More than just a Dracula novel, it’s a great addition to the entire vampire genre.”
—SF Reader

“I don’t say this lightly: J.D. Barker is a force to be reckoned with.”
—Tosca Lee, NY Times Bestselling Author

“Barker knows how to evoke chilling imagery and will have readers anxiously looking over their shoulders with each terrifying “clickity, click, click.”
— Library Journal

“Barker is a master wordsmith.”
— AudioBookReviewer.com

“It is clear Barker is a name to watch.”
—The Horror Bookshelf

“Mr. Barker may have begun by following in the footsteps of such literary royalty as Stephen King, Thomas Harris, and Dean Koontz, but he has blazed a unique path all his own.”
— Fresh Fiction

Sign up for J.D.’s newsletter for news, previews, and more!